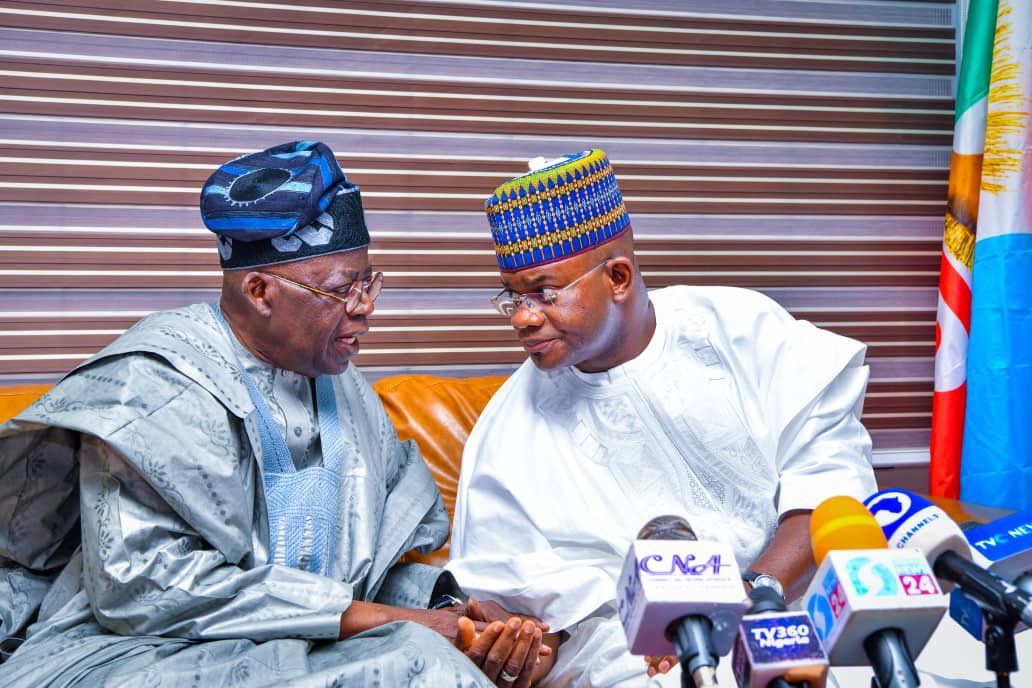 Bola Tinubu, the presidential candidate of the All Progressives Congress (APC), on Friday congratulated the governor Yahaya Bello of Kogi, for having mobilized the conscience of young people during his campaign.

Mr Tinubu said as much during his visit to Governor Bello in Abuja, just 72 hours after he emerged as the APC’s flag bearer ahead of the 2023 presidential election.

Mr Tinubu described Mr Bello as his son, adding that the governor remembered “what the nation wants to be”.

A former governor of Edo and former national chairman of the APC, Adams Oshiomhole, was also present at the meeting.

The presidential hopeful also thanked President Muhammadu Buhari for providing an equal playing field for all candidates during the special convention and the primary.

Mr Tinubu said: “The man of convention, the man of democracy of that day was Muhammadu Buhari.

“Yahaya Bello is my son; you have mobilized the conscience of the young people of the county. You remind us of what the nation wants to be.

Mr. Tinubu described his victory as a very good step for APC stakeholders to work for a united country that cares about prosperity.

He also thanked all the members of the Yahaya Bello campaign organization, adding that “you all made an impression, you were resolute”.

“The (opposition) thought there would be chaos and crisis. But we have seen peace. Emily Lokan. It’s my turn,” he said.

Mr Tinubu said he was very proud of the managing director of the presidential campaign organization Yahaya Bello, Hafsat Abiola-Costello.

He noted that the peace and joy enjoyed by the country was due to his late father, “MKO Abiola, the reason why June 12 has become a public holiday.”

He also revealed that it was in the house of Kudirat Abiola (Hafsat’s mother) that he found the cap with which he dressed up and fled Nigeria.

“I am happy to be back to save Nigeria,” he added.

Mr. Tinubu also hailed the courage of Governor Matawalle, who he said faced the worst forms of opposition, including banditry.

“I thought the termites were going to eat it. He listened to the words of the elders, brought reconciliation and peace to Zamfara State,” Mr. Tinubu said.

In response, Governor Bello announced that he had collapsed his presidential campaign council and would donate the building to Mr. Tinubu’s campaign organization.

The governor promised that he would take to the streets to campaign for Mr. Tinubu and lead the APC to victory.

“I offer you my campaign organization secretariat. I learned a lot from the little lecture you gave us.

The governor noted that the convention and primary elections have come and gone. He promised to get young people campaigning for Mr Tinubu to ensure the APC wins convincingly.

“PDP will never run this country again. Thank you to all of my fellow governors for giving me the opportunity to learn from you.

“Senator Abdullahi Adamu (National Chairman of the APC) never lost the elections and we will win the 2023 elections. Our convention went smoothly and peacefully,” he added.

Support the integrity and credibility journalism of PREMIUM TIMES

Good journalism costs a lot of money. Yet only good journalism can guarantee the possibility of a good society, an accountable democracy and a transparent government.

For free and continued access to the best investigative journalism in the country, we ask that you consider providing modest support to this noble endeavour.

By contributing to PREMIUM TIMES, you help sustain relevant journalism and keep it free and accessible to everyone.