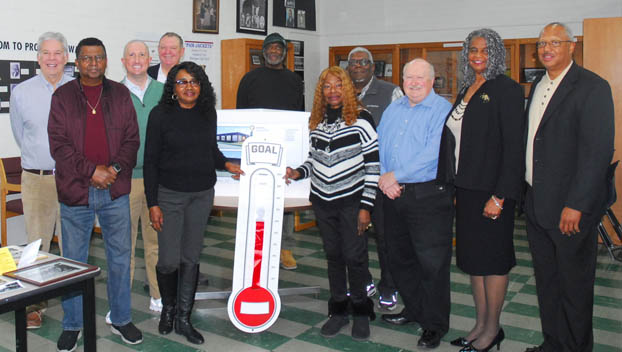 Organizers of the PS Jones Museum of African-American Education announced this week that the facility is entering phase two of its plan to transform the museum into a local tourist destination offering classes at PS Jones High School, which was the one of 300 historically black high school students in North Carolina.

A group of Washington residents, many of whom attended pre-integration high school, have been working for several years to transform a space on the school grounds into a museum highlighting the history, efforts, accomplishments, and l importance of the school and its alumni. A reception was held at the museum in October 2021 to share the master plan for its transformation and launch a pledge campaign to fund the project’s second phase of development, according to a press release.

Zebulon-based Design Dimensions, which designed the North Carolina estuary, was chosen for the project, according to museum curator Alice Sadler, who recently brought together top donors to announce the status of the campaign. pledges and rally more community support to complete phase two. fundraising goal of $28,000. The PS Jones Alumni Association is already at 60% of this goal. Sadler said that with more pledges pledged, members plan to meet their goal before the March 31 deadline.

“We’re thrilled they chose us,” Sadler said of the dealership’s decision to take on the idea, which was inspired by Washington resident Tony Moore, a member of the Washington-based “95 East Goldwing Riders.” Washington. Moore submitted his plan to the dealer, who laid out a route that drew cyclists from as far away as Fayetteville, and included a private tour of the museum before the sheriff-escorted group returned to Winterville. This fundraising total has not yet been released.

After a recent private tour for members of the Washington Tourist Board, member Kathleen Simpson called the establishment a “hidden gem in Washington.” It’s not just African-American history. This is Washington’s story.

Those wishing to donate can still do so by visiting the Aumni Association’s website – PSJonesAlumni.com – or by coming to the museum during regular business hours from 11 a.m. to 3 p.m. to advance the completion of this museum,” said Wali Saleem, the museum’s finance director. “It will be a good thing for the community.”