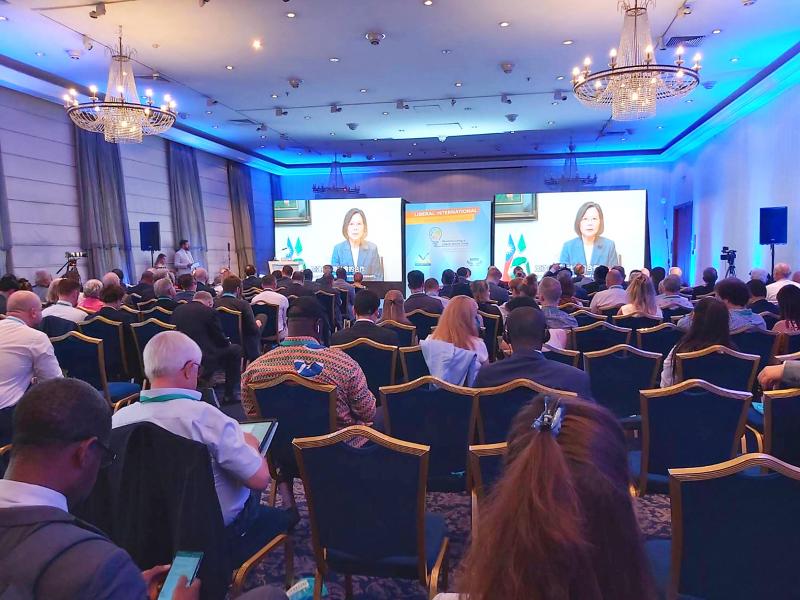 The group recognizes the Chinese threat

Liberal International was established in 1947 as a federation of liberal political parties around the world. Last week it held its 63rd congress in Sofia, Bulgaria, attended by 221 representatives from 58 countries.

President Tsai Ing-wen (蔡英文), in her capacity as chairwoman of the Democratic Progressive Party (DPP), delivered a speech in a pre-recorded video at the opening of the convention on Thursday.

Photo courtesy of the Democratic Progressive Party via CNA

DPP spokeswoman Hsieh Pei-fen (謝佩芬) said yesterday that the party, which has been a member of Liberal International since 1994, thanks the group and its global partners for their long-term support for Taiwan.

She said many politicians voiced support for Taiwan at the congress, including Ilhan Kyuchyuk, a Bulgarian lawmaker and co-chair of the Alliance of Liberals and Democrats for Europe; Art Eggleton, former Canadian Minister for International Trade and Minister of National Defence; Canadian legislator Leah Taylor Roy; British Member of the European Parliament Phillip Bennion; and South African lawmaker Thomas Walters.

The resolution on the world today adopted at last year’s congress expressed concern about China’s impact on Taiwan, including its interference in Taiwan’s elections, Hsieh said.

This year’s resolution expressed concern over the growing number of Chinese incursions into Taiwanese waters and airspace, saying such moves “may unilaterally undermine the status quo of peace and stability in the Indo- peaceful”.

He added that he “strongly supports” Taiwan’s inclusion in international organizations such as the WHO and the Comprehensive and Progressive Agreement for Trans-Pacific Partnership.

Liberal International’s executive committee also passed a resolution transforming its “Fair Trade Task Force” into a “Fair Trade Standing Committee”, recommending Hsieh as one of the committee’s eight members and the sole representative. from Asia.

DPP lawmaker Lin Ching-yi (林靜儀) was also re-elected as one of the 22-member human rights committee.

Comments will be moderated. Keep comments relevant to the article. Remarks containing abusive and obscene language, personal attacks of any kind or promotion will be removed and the user banned. The final decision will be at the discretion of the Taipei Times.