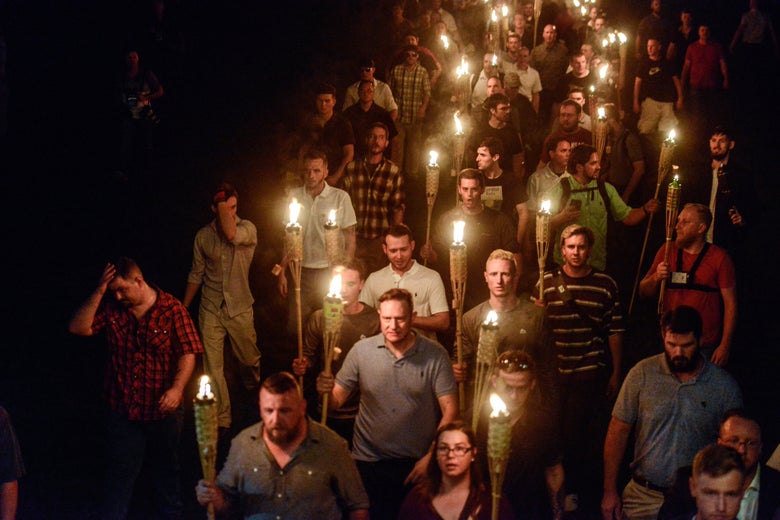 The defendants at the Charlottesville rally trial had no coherent strategy.

The jury in Sines vs. Kessler, the historic civil lawsuit against the organizers of the 2017 Unite the Right rally in Charlottesville, began its second day of deliberations on Monday. After four long weeks in court, the jury is expected to deliver a verdict before Thanksgiving. Many who have listened to the 16 days of testimony and argument expect the defendants to be held responsible for conspiring to commit racial violence. The moving and traumatic testimonies of the plaintiffs and defendants only provide a glimpse of the horrors experienced by the plaintiffs in August 2017, when the defendants converged on Charlottesville. But juries can surprise even the most impartial spectator, and the acquittal last Friday of Kyle Rittenhouse, who shot two people and injured another during an anti-racism protest last year, shows that justice before the courts is not always the expected justice.

The defendants spent most of the trial fighting with their back foot. Of the 14 days of testimony, the plaintiffs’ case represented about 13. The defense of those who organized Unite the Right, now a disunited amalgamation of essentially seven different factions, brought only two external witnesses and did not. had no expert testimony to support their claims. Instead, they depended on a mixed strategy of trying to dazzle the jury with arguments about free speech, self-defense, and politics. In several cases, the defendants attacked each other, including an awkward exchange between Richard Spencer and his co-defendant Jason Kessler. “When did you determine that I was a sociopathic narcissist?” Spencer asked. Kessler responded with an invective at venom, telling Spencer, “You were just despicable to anyone you came in contact with, like a robot, like a serial killer.”

Ironically, given that the event was called “Unite the Right,” the various defendants seemed to have no coherent strategy. When the accused did not point the finger at each other, they spent their time arguing their case in the court of popular opinion. The defendants have relied on the type of argument more suited to heated debate on Twitter than a structured court-worthy defense. Spencer and his co-defendant Christopher Cantwell, who both represent themselves, have attempted at various points in their pleadings to argue for the legality of hate speech.

The defendants tried on several occasions to present their comments on the violence before the rally as a matter of permitted speech under the First Amendment. Their defense was that Kessler had obtained a permit for the rally, suggesting that the violence was just a by-product of others attempting to infringe their right to assemble. Josh Smith, the lawyer for the defendants Matthew Heimbach and Matthew Parrott, former leaders of the traditionalist Labor Party, even went so far as to openly allege that the plaintiffs were engaged in a conspiracy to deprive his clients of their civil rights by obstructing the passage in the park. Smith provided no evidence linking the plaintiffs to such actions.

While walking away from James Fields, who was convicted of the murder of Heather Heyer after hitting demonstrators with his car, the defendants each attempted to present any violence as a matter of self-defense. Without the mysterious antifa and incompetent police, there would have been no violence at all, they said. The defendants argued that at similar gatherings, such as that of Pikeville, Kentucky earlier in 2017, no violence took place after the police kept the warring parties separate. (This argument resonates particularly well with Kessler, who is appealing a lawsuit alleging that Charlottesville police failed to protect his right to hold the rally, which was dismissed last year by the same court.)

Most of the defense time has been consumed by the fabulous conspiracy theories Cantwell has pursued for years. He harassed almost all of the complainants during cross-examination, asking them absurd questions about the color of the bandanas worn by anonymous passers-by, whether people were wearing helmets, and whether or not they knew Emily Gorcenski (one of the perpetrators). of this room). In this conspiracy case, Cantwell believes in a whole different kind of conspiracy theory: that the lawsuit is the product of a Jewish conspiracy in which the plaintiffs worked with antifa to prosecute him.

Cantwell’s arguments for his conspiracy theory are as bizarre as his defense strategy. He hinted that the plaintiffs conspired with Gorcenski to tape their attendance at the rally, so that it could be used as part of a pre-planned lawsuit against him and the other rally organizers. “Isn’t it strange that the only faces shown belong to you and your co-accused, Natalie Romero?” Cantwell asked plaintiff Devin Willis while showing a live broadcast of the tiki torch rally shot by Gorcenski. Additionally, Cantwell’s attempts to contradict Romero’s testimony showing graphic images of his attack that backfired on him. Cantwell asked Romero to identify anyone caught on camera hitting her. “Someone starts hitting us, then another. Looks like you were literally… is that you? She said, referring to Cantwell.

When the defendants were not exposing the jury to slow-motion reruns of the unnecessary violence they themselves had committed, they were trying to dazzle the jury with nuanced discussions of white nationalist politics. Heimbach, a former leader of the traditionalist Workers’ Party, painfully explained to the jury the media strategy of the founder of the American Nazi Party, George Lincoln Rockwell, known as the “Rockwell Pivot”. Spencer took the opportunity to defend himself to condescendly describe metaphysics and metapolitics to the jury. Spencer attempted to argue, in a rant steeped in anti-Semitism, that like Jesus, he was subjected to an ancient form of punishment known as a “scapegoat” before Judge Norman K. Moon interrupted him. . Spencer blasted, “You can’t interrupt me for using poetry!”

Their antics contrasted directly with the applicants’ two academic expert witnesses. Chapman University sociologist Dr Peter Simi testified about the white nationalist movement’s “front” and “behind-the-scenes” behavior, how they superimpose irony to hide sincere invocations of violence, and reliance on the movement’s use of “optics” in an attempt to distance themselves from the same violence they privately seek to foment. Perhaps the highlight of the trial was the questioning of Dr Deborah Lipstadt, an expert in Holocaust studies at Emory University, who has authored several books on the subject of Holocaust denial. Dr Lipstadt testified to the symbolism used by the alt-right and how the neo-Nazis seek to continue Adolf Hitler’s mission to exterminate the Jews. Only Cantwell was stupid enough to meaningfully cross-examine Lipstadt, asking him at one point if the Holocaust was an easy target for Jewish jokes. She easily parried her attack, saying, “I find it hard to believe that the genocide… is a good subject for jokes.

Although the plaintiffs presented a remarkable case against a fragmented and self-sabotaging defense, it was far from a perfect effort. The plaintiffs’ various attorneys spent considerable time impeaching the defendants for discrepancies between their deposition and their testimony at the bar, a significant but ultimately tiresome effort that did not win the favor of Judge Moon, who repeatedly berated them. for the matter to continue.
In addition, the complainants did not call any significant witnesses apart from the complainants themselves. This gave the defense plenty of openings to introduce just enough doubt as to whether the defendants’ violence could have been defensive in nature. Justice Moon inexplicably allowed the defense to call a witness, Southern League Richard Hamblen, who attempted to claim he was assaulted during the rally by a woman who was not a party to the case. And despite objections, Moon allowed testimony claiming that Deandre Harris, whose brutal beating by six white supremscists in 2017 was filmed, assaulted a Southern League member, but prevented complainants from presenting testimony that Harris had in fact been acquitted of the charge.

As the jury wrapped up its first day of deliberations, 12 Wisconsin jurors acquitted Rittenhouse of all counts. Rittenhouse’s verdict has raised critical questions about the threat that armed vigilantes pose to U.S. First Amendment rights. In this context, Sines vs. Kessler is more than a conspiracy to commit violent acts in Charlottesville four years ago. The trial and the impending verdict are a reflection of our current zeitgeist. The question is whether the violence of white supremacy becomes unassailable in the face of even the slightest opposition. The legal avenues to combat and punish such violence are woefully inadequate, as the Rittenhouse verdict shows.

Now, eleven ordinary people in Charlottesville will have to decide whether the neo-Nazis and white supremacists who used the trial to spew more hate will be held civilly responsible. A question looms: What will it mean if neo-Nazis and white supremacists can call for a race war, plan a race war, then take to the streets in an attempt to start that race war – without any fear. consequences ?

[Ethical disclosure: Emily Gorcenski was attacked by and pressed charges against Chris Cantwell in a case related to the events in question. A related civil lawsuit between Cantwell and Gorcenski was settled with a mutual release of claims in 2018.]