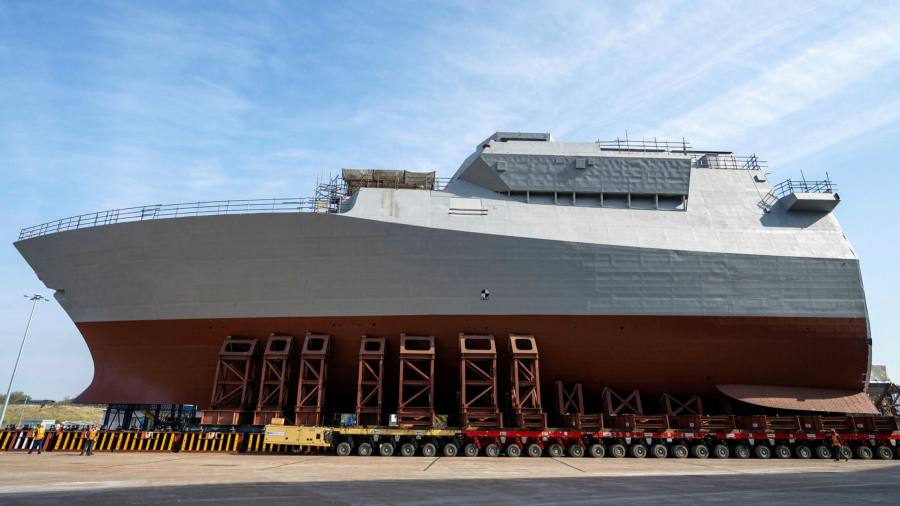 Hailed by the Prime Minister as a boost for British industry, the so-called ‘refresh’ promises to deliver a pipeline of 150 new naval and commercial vessels over the next 30 years. It builds on an earlier strategy by industrialist Sir John Parker, who recommended a steady pipeline of orders to end the industry’s decades-old boom and bust existence.

The industry welcomed parts of the revised strategy, in particular the decision to include commercial shipyards as well as the focus on how to support green maritime technologies.

Creating the 30-year horizon for ship supply is a “genuine milestone”, said Sarah Kenny, chair of the trade body Maritime UK. “The strategy also recognizes that shipbuilding is about more than building and welding. This is the life cycle. . . what you do in terms of design and support. »

Despite this support, leaders, unions and analysts are concerned about the government’s approach to a key programme: the £1.5billion competition to build three Fleet Solid Support (FSS) ships.

The controversial tender process has already seen the Ministry of Defense flip-flop on ship classification, while those involved say the government’s approach to the scheme risks undermining stated ambitions to provide a smooth flow of work to UK yards.

The Ministry of Defense initially issued the tender for the ships, which will provide Navy aircraft carriers with equipment, ammunition and food so that they can stay at sea for long periods, at international competition, in 2019. The ships were reclassified as warships last year. , which should have meant they would be built in the UK.

However, last September the government published the list of four consortia that had been awarded £5million contracts to develop their bids. The list included companies based in India and the Netherlands, alongside British defense heavyweights BAE Systems and Babcock, which are part of a consortium dubbed “Team UK”.

Then some of the members of the four consortia were recently told that the indicative proposals were “too high” and needed to be “back to the drawing board”, confirmed three people familiar with the matter. Formal bids are due this summer and the contract awarded next spring.

Bob King, who leads the defense industry group at the Prospect union, said bidders had been specifically asked to subtract the costs of building the ships in the UK and “put them overseas “.

If that happens, ‘there will be no drumbeat’ for UK yards, King said, adding there would be knock-on effects for businesses in national supply chains as well as industry skills . “This is the future not only for defense but also for British engineering. If we cannot build our own warships, what else will be lost?”

“These warships will be integrated into the UK and build on the success of the Type 31 programme,” the “refresh” strategy says, adding that international partners will be “encouraged to work with UK companies” to help “to improve productivity, competitiveness and exports in civil and naval programs”.

BAE and Babcock declined to comment. The Ministry of Defense said the competition would ‘bring significant value to the UK, including the recapitalization of our shipyards’. “It is up to the bidders to develop solutions that meet the objective of providing social value and investment in the UK,” he added.

A government source insisted that a “significant part of the work will take place in the UK, including the installation of sensitive systems”.

Several industry leaders said the department’s approach to the FSS tender underscores the dilemma that has plagued defense procurement for years: how to encourage competition and ensure value for money while guaranteeing a viable national industry.

Francis Tusa, editor of Defense Analysis, said that “it looks like, again, the Royal Navy wants a fairly complex ship, but at great prices.

“The only people who will offer the kind of price the Royal Navy wants are overseas shipyards.”

However, “this is not in line” with the shipbuilding update, which states that “the recapitalization of British industry” would be an important feature of the FSS programme, he said.

Parker said he welcomes key elements of the new strategy, including the new emphasis on green shipping and endorsement of a 30-year horizon. However, he stressed that volume and timing certainty of new orders were important to boost productivity. He wondered if there was still an absence of seeing the industry as a “unified system” of shipyards to tackle building larger ships with a series of block builds.

This would reduce construction times and optimize the geographical distribution of skilled labour.

The construction program for the two aircraft carriers “has partially used this approach with real success and it could be applied to the FSS”, he added.

That view is shared by John Howie, director of corporate affairs at Babcock, who will co-chair a new industry initiative called Shipbuilding Enterprise for Growth.

Howie said that while Parker’s review had envisioned more work being spread across UK yards, “we haven’t quite got there yet”. “One of my ambitions for the shipbuilding strategy refresh is to make sure this distributed building model works in practice.”

John Spellar, a Labor MP and member of the House of Commons Defense Select Committee, said there had been “some progress” since Parker’s strategy was published, including success in securing defense contracts. export for Type 31 frigates.

At the same time, however, the MoD was still commanding ships overseas. “So in terms of supply chain and working for national yards, the government still doesn’t get the message.”