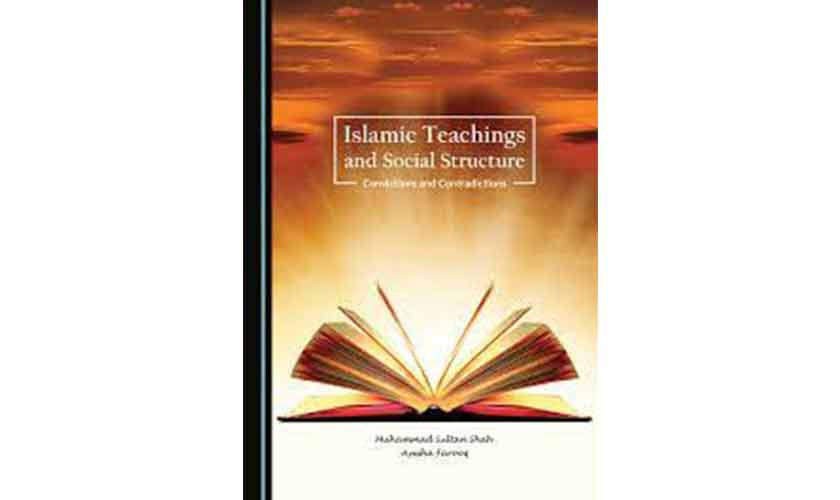 Social structure from an Islamic point of view | Political economics

rof Sultan Shah and Dr Ayesha Farooq studied the highly relevant topic of social structure from an Islamic point of view. The location of their analysis is Pakistan. I believe that these questions are of great importance and deserve careful consideration by scholars. Therefore, I consider this study quite invaluable.

Their latest book, Islamic Teachings and social structure: convictions and contradictions is a welcome addition to the existing body of knowledge. Such themes have long been confined to ulama who for the most part had a biased vision, bearing no relation to the reality on the ground.

Bridging the gap between religious injunction and the social reality on the ground is only possible if scholars begin to make new epistemic syntheses to produce knowledge. Thus, the authors are to be commended for their effort.

Since the study conducted by Prof. Shah and Dr. Farooq is about social structure, I will provide the intellectual history of the concept before highlighting the merits of the study. I can affirm from the outset that the “social structure” is a modernist construction necessitated by the situation. It emerged in the wake of the industrial revolution. Human society was studied using the typical methods of the natural sciences, which is why the word “structure” was coined and immediately became common.

Two main groups of approaches design these models differently. One, top-down, tends to see a global organization as emerging from a shared common culture. The second, bottom-up, pays more attention to agglomeration processes that start with individuals that may or may not start with shared cultural patterns.

The idea of ​​”social structure” was first introduced by Herbert Spencer. At the time, the word ‘structure’ in biology referred to ‘what we would now call ‘organs’, collections of contiguous tissue performing a specifiable function for the organism. Spencer argued that society had “social structures” which performed social functions. Thus, the root of the idea of ​​social structure comes from the “organism metaphor” applied to society.

This metaphor in the Western tradition goes back to Plato who proposes a mapping between the characteristics of people and those of the city. More importantly, it makes a distinction between (what might appear to us as) cognition, emotions, and instincts.

In the fourth book of The RepublicPlato asked Socrates to demonstrate that three parts of the soul have different functions – that we “learn with one part of ourselves, experience anger with another, and with a still third desire the pleasures of nutrition and generation”.

Plato did not offer a model for the organism of the state, and it seems that no such developed analogy emerged in Europe until the mass of differentiable urban occupations were no longer associated with servile status . The social structure entered the lexicon of human knowledge with the appearance of modernism, more precisely following the industrial revolution.

Despite his use of the organism metaphor, Spencer always viewed the functions performed by social structures as being, fundamentally, the functional needs of the individuals who make up society (and not those of the social whole apart from individuals). Human action is fundamentally driven by the satisfaction of human needs and desires, such as defending against enemies and obtaining food. Individuals cooperate to achieve these goals, giving rise to structures.

Thus, “social structure” referred to the internal organization of the resulting social whole as a by-product of the functional interdependence of human life (a point Malinowski was to reiterate later). Friedrich Angles offered an almost similar kind of theorization in his famous book, The Origin of the Family, Private Property and the State (1884).

Claude Lévi-Strauss applied these structuralist principles to the study of social structure in The basic structures of kinship. Here, Lévi-Strauss examined the structural logics that organize the complex patterns of kinship relations by understanding them as formal laws of transfers (because a marriage can be considered as the transfer of a daughter (or a son) from one lineage to another). Lévi-Strauss then focused on cognitive structures, but the encouraging results of his work on kinship led to a common enthusiasm for “structure” in the social sense as well.

Religion helps establish the moral order of a society, legitimizing social hierarchies, collective goals and cultural boundaries. Religions promote social change by guiding their followers to share or “live” their views. The encouragement of the outward expression of religious opinions makes these opinions a vehicle for social change. The acceptance or rejection of social changes is also often linked to personal convictions.

The social system of Islam is based on sound and just principles, which are designed to ensure the happiness and prosperity of the individual and of society. It does not tolerate class struggle, social caste or the domination of the individual over society or vice versa. The Islamic social order, the Ummah, as the bearer of witnesses (of the truth) before all mankind (Al-Qur’n, 2:143) is the dynamic vehicle for the realization of the Divine Will in the space-time – in history.

In early Islamic societies, pre-Islamic Arab culture was still influential; the family was organized around a patriarchal clan with a common male ancestor. Families were led by the oldest male member of the family. With the advent of Islam, the spirit of the social structure changed. However, the (outer) shape remained unchanged. The family was the pivot of social organization. This becomes the main object of study under study.

Intermarriage and its effects, the status of a girl in a patriarchal family and population growth are discussed with reference to Quranic injunctions and the traditions of the Holy Prophet (peace_be_upon_him). I wish the authors had added a detailed introduction. They should have defined a social structure from the start. Conspicuously absent is the grasp of scholars like Ibne Khaldun. Also missing an index at the end. Despite these shortcomings, this book deserves the attention of general readers as well as students.

The author is a professor in the Faculty of Liberal Arts, National University Beaconhouse, Lahore