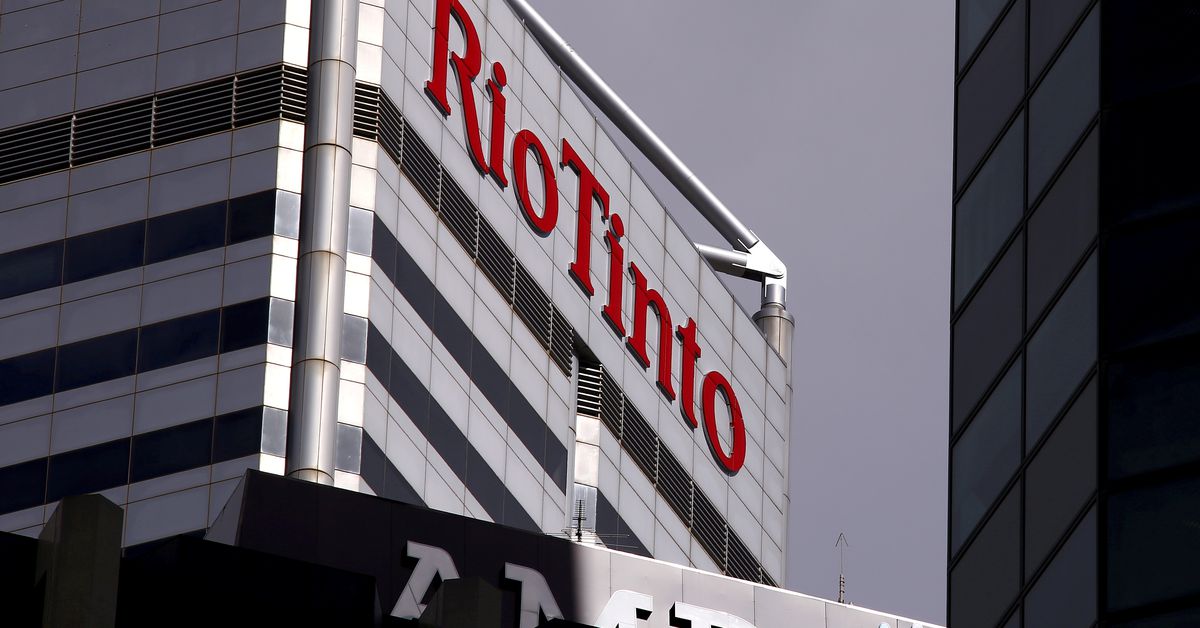 A sign adorns the building where mining company Rio Tinto has its office in Perth, Western Australia, November 19, 2015. REUTERS/David Gray

LONDON, April 8 (Reuters) – Rio Tinto (RIO.L), (RIO.AX) said on Friday that climate change was at the heart of its new strategy at its first in-person annual general meeting (AGM) in two years in London, after shareholders asked the miner to set clear targets to reduce indirect emissions.

Chief Executive Jakob Stausholm said the company is committed to increasing research spending to develop technologies to help its customers decarbonize, and highlighted its investments in renewable energy.

“Climate change…is the defining issue of our time and is at the heart of our new strategy,” Chairman Simon Thompson told the meeting.

The company in October announced a $7.5 billion plan to reduce emissions by 2030, aiming to halve its Scope 1 and 2 carbon emissions – direct company emissions and certain types of emissions. indirect emissions – by the end of the decade.

The group, however, did not specify how it intended to reduce Scope 3, or customer emissions, but said it was working with partners.

Investment manager Sarasin and Partners voted against Rio’s financial accounts and reappointment of auditor KPMG, saying it is unclear how the costs of meeting carbon commitments have been factored into the financial statements of the company.

Thompson said QMM had to release water from the mine site into the surrounding environment due to unusually heavy rainfall in the early months of this year.

Dead fish were found after the water was released, but the company’s testing of the fish revealed no signs of toxicity or heavy metal contamination, he said.

Malagasy media reported that communities living near QMM protested outside a nearby town hall and that the Ministry of Water was investigating the water spill.

Thompson said Rio is planning a water treatment plant and developing drinking water projects for communities around the mine. “I absolutely accept that we have work to do to improve our license to operate in Madagascar,” he added.

Rio is dual-listed in London and Sydney and the votes from the meeting will be counted and made public at its Australian annual general meeting in Melbourne on May 5.

Its reputation has suffered, however, from a report it published in February exposing bullying, racism and sexism at the company, and the Serbian government’s shutdown of its lithium project in the country.

The company’s 2020 destruction of 46,000-year-old rock shelters at Juukan Gorge in Australia to expand an iron ore mine also caused public outcry.

Dominic Barton, a former diplomat, joined the board on Monday and will assume the role of chairman in May, replacing Thompson, who has held the position for four years and is the latest of many high-profile departures following the explosions. .

“We have a lot of work to do – but I think we are on the right track,” Stausholm told the AGM.

Investment manager abrdn abstained in the vote to approve Rio’s annual reports and accounts, citing the “nature, severity and systemic impacts of the issues raised” in the workplace culture report.

“If we do not see progress against the milestones set by the company, we will take further action,” abrn chief steward Andrew Mason said in a statement.

Reporting by Clara Denina in London and Helen Reid in Johannesburg; Editing by Kirsten Donovan and Jan Harvey

The group wants to support local residents with autism

Behind the Scenes at Louis Vuitton’s Aranya Festival: A Field Strategy for…