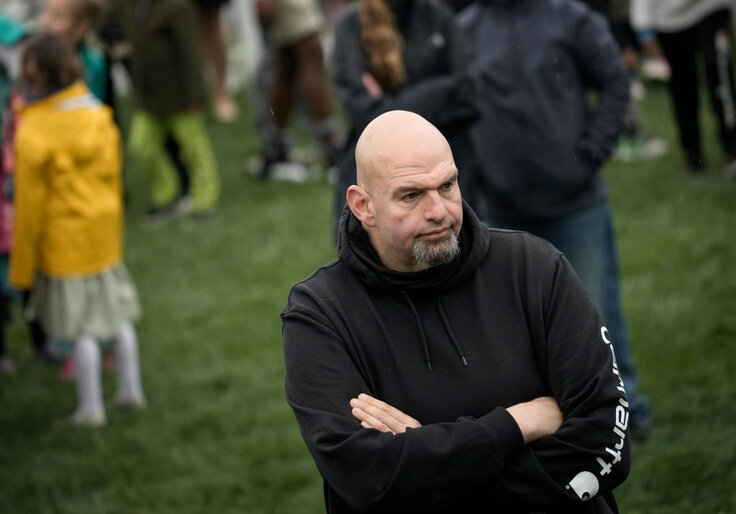 While courting the endorsement of an anti-police group in 2018, Senate hopeful John Fetterman said he opposed “tough on crime” policies and was ” very excited” about the reforms proposed by a Philadelphia district attorney who is now facing impeachment due to a massive spike in violent crime in the city.

Fetterman outlined his views on a “progressive agenda” in a questionnaire for Reclaim Philadelphia, a left-wing activist group that claims Philadelphia’s police budget comes from money “stolen from communities.” Fetterman, who is seeking endorsement in the race for lieutenant governor, told the organization he would use the office “as a bully pulpit for the larger issue of criminal justice reform.” .

“There is a real opportunity to build a statewide platform that elevates and exposes the damage caused by the school-to-prison pipeline, the prison industrial complex, and ‘tough on crime’ policies. like ‘Stop and Frisk’ and cash bail,” said Fetterman, who has voiced support for sanctuary cities and Philadelphia District Attorney Larry Krasner, one of the left-leaning prosecutors backed by billionaire Democratic donor George Soros.

Fetterman’s campaign ignored questions about his current views on Krasner and cash bail, but a spokesperson said Fetterman supported the police as mayor of Braddock, Pennsylvania.

“John has worked hand-in-hand with local police, so he knows the challenges they face and will support them with the funding they need,” campaign spokesman Joe Calvello said.

Fetterman’s past embrace of progressive criminal justice reform could hurt his chances as crime rises across the country. Republicans highlighted Fetterman’s positions on the issue as well as his tenure on the Board of Pardons in a series of searing ads aimed at portraying the Democrat as soft on crime. A GOP group affiliated with Senate Minority Leader Mitch McConnell (R., Ky.) ran ads highlighting the Free Washington Beacon‘s report that Fetterman voted alone to free a man serving a life sentence for the first-degree murder of a man he killed for money to buy heroin.

Republicans also pointed to Fetterman’s endorsement of Krasner, who faces impeachment in the Pennsylvania legislature for “dereliction of duty” after soaring violent crime in the city. Murders in Philadelphia have risen from 353 when Krasner took over in 2018 to 562 last year.

The GOP onslaught appears to have narrowed Fetterman’s lead over Republican Mehmet Oz. Fetterman ran a series of ads defending his crime record. He also reversed his support for universal drug legalization, a reversal from his 2016 comments that he supports “decriminalization at all levels”.

Current and former law enforcement officials have also criticized Fetterman’s progressive views. Thirteen Pennsylvania sheriffs clashed with Fetterman in July over his criminal justice stances, saying his support for the release of a third of state inmates and his support for Krasner would “add to crime rates.” already on the rise in Pennsylvania, especially in Philadelphia.”

Fetterman’s call for an end to “tough on crime” policies like cash bail is “a huge mistake”, according to James Gagliano, a retired FBI supervisory special agent who is mayor of Cornwall-on- Hudson, NY

“For those of us who study crime trends, we immediately felt the causal relationship between the release of repeat criminals and the stark increase in crime, particularly violent crime,” Gagliano told the Free tag.

Another ‘tough on crime’ policy that Fetterman opposes – ‘Stop and Frisk’ – has garnered renewed attention in Philadelphia amid soaring gun crime in the city of brotherly love .

Darrell Clarke, President of the Philadelphia City Council said this summer that there must be a “conversation” about police tactics, in which the police question people they suspect of having committed or are about to commit a crime.

“At the end of the day, there are a lot of citizens on the streets of Philadelphia wondering, ‘When are we going to consider constitutional stop and frisk?'” Clarke said.

Fetterman’s opposition to police use of “Stop and Frisk” appears at odds with his use of a similar tactic as Mayor of Braddock in 2013. Fetterman chased and fired a shotgun at a jogger unarmed black man who he mistakenly thought had fired a gun near his home. Fetterman declined to apologize for the incident.

While Fetterman says he opposes the defund the police movement, he has enlisted the support of several activists who support the cause. In 2020, Reclaim Philadelphia urged supporters to lobby Philadelphia Mayor James Kenney (D.) for $120 million in funding for the police department, saying the money “was stolen from communities and earmarked for policing.” In June 2021, Reclaim Philadelphia organized a sit-in at Kenney’s office demanding cuts to the police budget.

The organization has not officially endorsed Fetterman, but the group holds canvassing events for the Democrat in Philadelphia every weekend.

Fetterman campaigned on the anniversary of 9/11 with abortion activists who support the defund movement. Fetterman also campaigned last month with three Philadelphia City Council members who support the movement. Fetterman’s appointee as Secretary of the Pardons Commission has called for ‘disarming the police’ and calls cop killer Mumia Abu-Jamal a ‘friend’, the Free tag reported.

Fetterman’s campaign did not respond to a request for comment.

How this 10.4% dividend strategy crushed the 60/40 portfolio

Marjorie Taylor Greene’s genocide rhetoric creates a structure of permission for the right — but permission to do what?