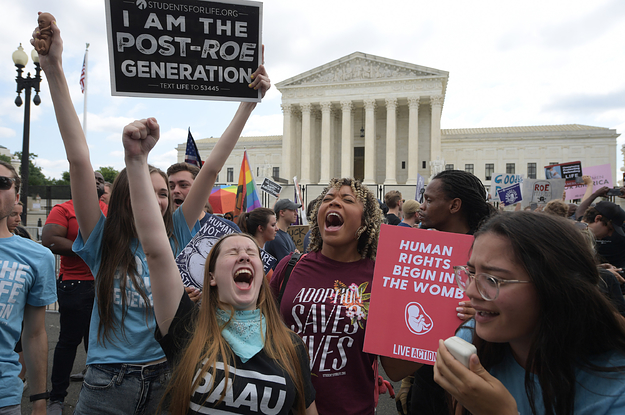 Outside the Supreme Court in Washington, DC, on Saturday, a small group of anti-abortion activists held a makeshift rally, celebrating the overthrow of Roe vs. Wade while being surrounded – and vastly outnumbered – by abortion rights protesters chanting to drown them out. From behind a small lectern, hung with a poster of an embryo and the words ‘Forceps off my body’, members of the anti-abortion group attempted to address the crowd, as they struggled to be heard of the only speaker they had setup.

It was all part of their week-long training to become the next “marines of the pro-life movement,” AJ Hurley, founder of the anti-abortion group Survivors (also known as Survivors of the abortion holocaust), told BuzzFeedNews.

Buoyed by the leaked draft notice in the weeks leading up to the Supreme Court‘s vote to end federal abortion rights in the United States, young men and women from across the country gathered in the nation’s capital to a crash course in anti-abortion activism.

“The reason I came out today is because we have training for young people,” Randall Terry, founder of anti-abortion group Operation Rescue, told BuzzFeed News on Saturday.

Terry, who helps Hurley’s organization, said that because of his age it was his “mission” to “train young people to fight this fight”.

“This is on-the-job training,” he said, referring to anti-abortion activists who rallied and, in some cases, confronted protesters for the right to abortion. abortion in heated debates before the Supreme Court on Saturday. “It’s the first day of a post-Roe world.”

He emphasized the importance of “confrontational rhetoric” and “aggression” in what he was teaching future anti-abortion advocates.

“I want these kids to feel the heat, the pressure, the tension of having an event with their picture [against] the backdrop of the Supreme Court,” Terry said.