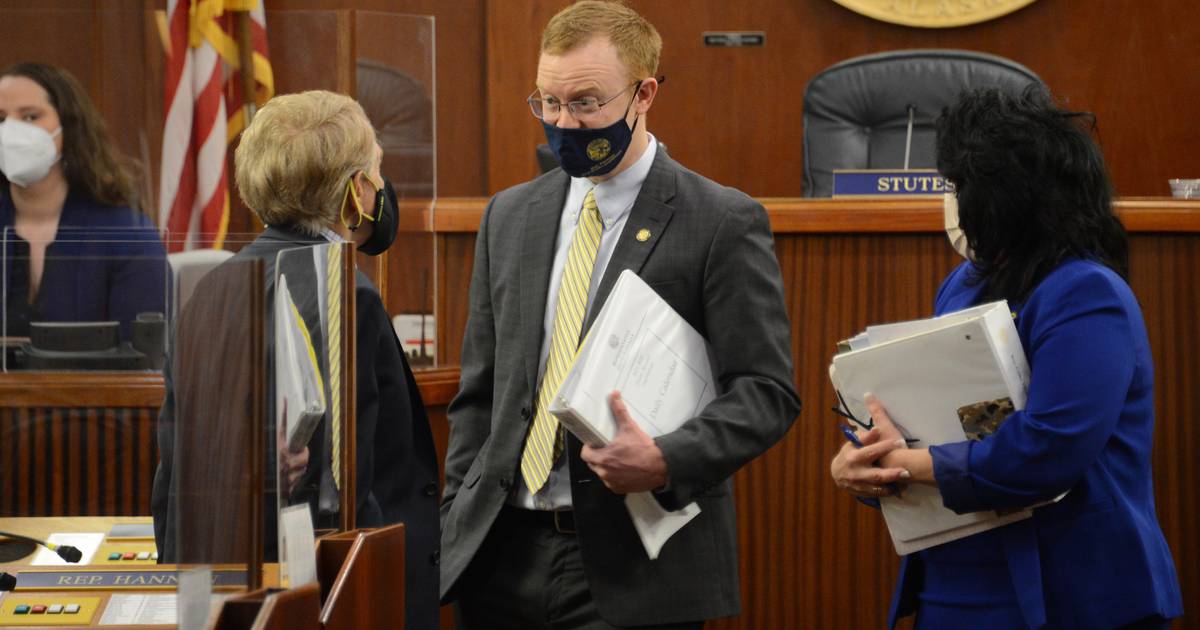 Alaska House is considering action against Rep. David Eastman, a ‘lifetime member’ of a group linked to the Jan. 6 riot at the U.S. Capitol

JUNEAU — Majority members of the Alaska House coalition are discussing whether and how to punish Rep. David Eastman, R-Wasilla, for his alleged membership in a far-right paramilitary organization whose leaders were charged with seditious conspiracy in connection with January 12. 6, 2021, United States Capitol riot.

Several members of the largely Democratic coalition said their discussions involved a variety of possible sanctions or actions, including his expulsion from the House. Other options include a legislative inquiry, a non-binding vote of disapproval, passing legislation related to a disloyalty clause in the Alaska Constitution, removing Eastman from committees, cutting his staff or its censorship.

“I think what we’ve learned about Rep. Eastman is extremely concerning. And I think that needs to be fixed. We need to at least look at it as a legislature and determine what action is warranted,” said Rep. Calvin Schrage, I-Anchorage.

The Alaska constitution prohibits anyone “who advocates, or aids, or belongs to any party, organization, or association which advocates the overthrow by force or violence of the government of the United States or the state” from perform a public function.

Eastman was identified last year as a “lifetime member” of a group known as the Oath Keepers. The members of this group, including its leader, are facing conspiracy charges after federal prosecutors this month accused them of preparing to take violent action to prevent Joe Biden’s nomination.

Eastman was present at the Jan. 6 rally held before people stormed the Capitol, though no evidence emerged of his involvement in the ensuing riot and he did not has not been charged with a crime.

Nor did Eastman denounce the Oath Keepers or deny his membership in the group, and when the leaders of the group were indicted, Eastman called the charges “politically motivated indictments”.

“This Oath Keepers membership is troubling,” said Rep. Matt Claman, D-Anchorage, who confirmed the options being discussed by the coalition.

Members of the State House are discussing whether Eastman’s alleged involvement with the Oath Keepers is sufficient to violate the disloyalty clause of the Alaska Constitution, contained in Article XIII, Section 4.

These discussions were encouraged by public pressure. There are a public petition calling for Eastman’s impeachment, calling for action on social media and sending letters to the editor, including one from Bethel Mayor Mark Springer.

Eastman is a graduate of the US Military Academy and more than 70 West Point alumni signed a letter last year urging him to resign.

There has been no public discussion of action against Eastman. Instead, lawmakers raised the issue in one-on-one discussions and behind closed doors majority coalition meetings.

Expulsion requires a two-thirds vote, meaning the action would require the votes of some of the Republican minority in the Alaska House, which holds 18 of the chamber’s 40 seats.

Such a measure would be unprecedented in the House. Only one lawmaker, Senator George Hohman, has been expelled from the Legislative Assembly, and that follows a corruption conviction in the 1980s.

Majority members said part of their delay in making a decision was their fear that a small action – or forcing a vote of no confidence that fails – would allow Eastman to portray himself as a politically persecuted victim. rather than for a violation of the Alaska Constitution.

Eastman was censured in 2017 by the House after claiming without proof that women in rural villages tried to get pregnant so they could get a free trip to a city for an abortion. It was the first time that the Chamber censured one of its members.

Springer, the mayor of Bethel, said steps below eviction won’t make much of a difference.

“They censored it. He’s like, ‘Big deal, I’m just gonna stay here and listen to it – I don’t care.’ If they censored it again, it still wouldn’t do anything,” he said.

House members who refuse to take action against Eastman, Springer said, are in “tacit agreement” with Eastman “acting outside the bounds of the Alaska State Constitution.”

“Either way, it will be difficult for some members of the minority to sign,” he said. “And I think if they consider that to be a tough call, that’s damn tragic.”

House Minority Leader Cathy Tilton, R-Wasilla, said she had a conversation with House Speaker Louise Stutes, R-Kodiak, about the issue. But Tilton’s Republican minority caucus has not discussed the issue internally, she added.

Tilton said Stutes discussed the idea that Eastman’s actions could negatively impact Alaska House as an institution. But personally, Tilton said she was reluctant to act.

“Rep. Eastman has the right to represent his constituency in any way he feels is representative of the district,” Tilton said. this stage.”

Rep. Laddie Shaw, R-Anchorage and minority House member, said he was also briefed on Eastman’s talks, but declined to share his opinion on what he thinks should be done.

Shaw said Eastman tends to “walk a fine line” in the Legislative Assembly – sticking to the rules just enough to avoid strong action.

Representative Sara Rasmussen, R-Anchorage, is the only member of an independent caucus separated from the coalition majority and the Republican minority. Eastman is the reason she is not a minority, she said.

If Eastman is running for re-election — he has filed paperwork indicating he intends to do so — the Alaska Division of Elections will have to determine if he is qualified. The division sometimes disqualifies potential applicants who do not meet residency standards, and it was not immediately clear whether the division had ever considered the disloyalty clause.

A division official said Wednesday that it has yet to review or discuss Eastman’s qualifications.

It’s hard to find parallels in other states, in part because those states don’t use Alaska’s constitution, which contains the disloyalty clause.

But the Fourteenth Amendment to the US Constitution contains a clause that prohibits someone from holding public office if they have sworn an oath to uphold the Constitution and then engaged in an insurrection against the federal government.

This clause was written during the Civil War. But its applications to the Jan. 6 riot are currently being investigated, and officials in other states have started considering legal challenges.

INVESTOR ALERT: Kirby McInerney LLP reminds investors that a class action lawsuit has been filed on behalf of FirstCash Holdings, Inc. (FCFS) investors and encourages investors to contact the company by March 15, 2022